Have you been noticing clusters of brightly colored bikes showing up in your town? If so, you’re witnessing a growing trend of bike share programs.

What is bike sharing?

A “shared” bike is one that’s parked in a public location that anybody with the proper access credentials can jump on and take for a ride. I’ve noticed these social bikes, as they’re sometimes called, showing up in more and more cities as I travel around the country. 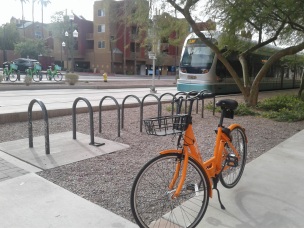 Above: Examples of bike sharing programs that are popping up in cities around the U.S.

My first experience with bike sharing was in 2008 when I lived in Denver. The Democratic National Committee held its convention there, and as a means of helping accommodate the transportation needs of all the people in town for the convention, bikes were made available for “checking out” by visitors to Denver at a number of stations placed around the downtown area. They also infused the city with a fleet of several dozen shiny new monstrous SUVs to shuttle politicians around, but I digress.

The bikes remained after the convention left town (so did the SUVs) and there was a push to enroll members who would continue to use the bikes. Since I worked in Downtown Denver at the time, I decided to try the service out. I commuted downtown by bus and had no real need for a bike. But every so often, I would grab one of the bikes on my lunch break and cruise a section of the Cherry Creek bike path near downtown Denver.

A few years later, I moved to Phoenix. It wasn’t until 2017 that shared bikes started showing up here. Now, it’s hard to not see the brightly colored bikes of competing companies available for use in Phoenix, Scottsdale, Tempe and other cities around the Valley. Fact is, there’s a bike share station located just outside the front door of the office building I work at in Tempe. I also noticed that there were social bikes available from multiple vendors in Downtown Dallas when I was there for the FinCon conference in October 2017.

How does bike sharing work?

No two social bike operations run exactly alike; however, the first step for most of them is to create a profile online. Along with some personal information, users provide a credit card number to which usage fees are charged. Once your membership credentials are issued, you can check out a bike from any of the locations in the system. To unlock a bike, you enter a code and password into the app on your smartphone or a small solar-powered computer on the bike. Some bikes must be returned to designated racks; others can be left in any public area.

Fees vary and tend to range from $5 to $10 an hour. There is little concern with people making off with the bikes since users handed over their credit card info upon registration. If a bike goes missing, the last person who used it is charged for the cost of the bike – about $1,200 as I recall from the small print.

See a demo of how bike sharing works in this short video:

The role of bike sharing programs in urban transportation

One thing is common with the places I’ve seen bike sharing operations is that the bikes tend to be located near points where mass transit can be accessed. It seems the strategy is for people to rely on bus or light rail to take them most of the way to their destination. Then they can jump on a bike to get to their endpoint. These areas also happen to be places where urban infill is happening at a rapid pace; meaning downtown areas with growing populations.

Since it’s likely more expensive and inconvenient to park a car downtown, people who live in such areas can choose to can rely more on public transit and social bikes for the majority of their transportation needs. I can envision that some people could become completely independent from owning a vehicle by combining mass transit and bikes with ride-sharing companies such as Lyft and Uber.

What do social bikes have to do with retirement? Or Gen X?

Over the last decade, more and more cosmopolitan cities have been making their way  on to the “best places to retire” lists. Retirees who respond to the surveys often say that they want to live in places that are easy to get around without the use of a car. Furthermore, bicycling is growing in popularity with the retired set – mostly boomers. Gen Xers have proven to be as likely or even more inclined than boomers to make decisions that are socially responsible. Even though transportation planners probably had Millennials in mind when they began rolling out bikeshare programs, it’s likely that Gen Xers will adopt them too.

Whether this is a wave of the future remains to be seen. However, it appears as though technology has helped a few entrepreneurs offer the shared bike programs on a large enough scale to be profitable. My hunch is that there are some government subsidies kicked in to help reduce traffic congestion and air pollution.

Let’s have a discussion

I love the idea! As I shared previously in a blog post called These three words will save you a ton of money, my primary means of transportation are mountain bike and mass transit. I wonder if this trend will last. I think the life expectancy of bike sharing very much depends on the adoption rate among users.

What do you think? Have you seen social bikes in your community? Have you tried one out? Will you? Do you think they’re here to stay? Other thoughts?